How to End the Refugee Crisis in the Middle East

Travelling around the world to give lectures about my foundation’s peace-building work, I see such a divorce between the politics of powerful nations and the people within them. The people I meet all want to help the refugees, but few of them know why the Middle Eastern refugees exist, beyond an idea that “they are fleeing war”. They ask me, “How can we help the refugees from the Middle East?” My answer to them is, “Stop the wars and there will be no refugees.” If you ask most people from the Middle East, that would be their answer too.

Of course we should help the refugees directly, through offering them a place of safety and through meeting their essential needs, but this is only placing a sticking plaster over a major wound.

I strongly believe that most of those fleeing the Middle East are doing so to save their own lives so that they can return to their homes when the cause of their flight ends. Most of them did not become refugees because they desired a better life elsewhere. Why would people go to sea in pathetic, unprotected, overcrowded boats in the hope of “streets paved with gold”? For them, life and death were equal. Only when life and death become equal would people throw themselves and their families into the sea in the hope that they might survive. How awful must life be at home, when this is seen as a better alternative, even for your own children?

The war that is driving millions of people out of their homes, communities and cultures, is not simply a homemade war. The Middle East has, for many centuries, been a battleground for regional and especially international powers, for control of resources or strategic locations, for religious or sectarian reasons, or even just because it formed a convenient battleground for two or more distant warring parties. 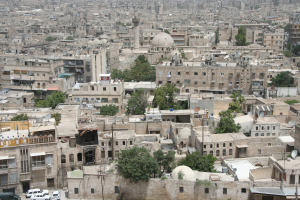 Today, if we look at the war map in the Middle East, we find nothing different. In Syria, Iraq, Lebanon, Libya and Yemen, we know very well that many different foreign powers are fighting there, including Russia, the United States of America, Iran, Saudi Arabia, and even Britain, France and Germany. In the last twenty-five years, those powers used their own forces to fight directly, and they used very well-paid mercenary armies to fight covertly under local banners; in this way, it can look to the casual observer that they are witnessing an internal conflict. Often, both methods are used simultaneously, as they are now in much of the region.

Therefore, we cannot speak about helping the refugees without acknowledging that many of the countries that are trying to help them are behind the wars that they are fleeing. Where proxy wars are behind an outflow of refugees, then I have no doubt that the powerful countries of the world, East and West, could indeed take action to stem the human flow through stopping the cause. I think of countries such as Syria, Libya, Yemen, Iraq and Afghanistan. In each of these nations, the warfare that is driving out or killing their population is fuelled, directly or indirectly, by other parties. I lived through seven years of the Lebanese Civil War when I studied in Beirut, and I experienced first-hand the horrific impact of proxy wars on a society. Lebanon suffered for seventeen years, and there was not a single day of the conflict that did not involve other nations, each taking advantage of the conflict to further their own interests.

How can the most powerful nations in the world claim to be civilised, yet allow such human tragedies to occur that today nearly 50 million people are refugees or are forcibly displaced from their homes? I ask this, knowing that the major reason is war, not natural disasters. Sometimes we are deceived into thinking that our technological advancement equals genuine civilisation. I believe that truly civilised societies should reject armed conflict. More than this, being civilised should empower us to be Ambassadors for Peace! Yet the first world exports 400 billion dollars’ worth of arms a year, nearly all of it to the third world.

As we discuss how to help refugees in this conference, I would like us to remember and keep in mind that we need to challenge our politicians and governments about their own role in those conflicts that are causing so many millions to lose their livelihoods, their homes and even their lives. We must bridge the gap between the people and their nations’ politics so that our nations’ actions genuinely reflect the kindness and generosity of their people.

Finally, we must remember that those refugees who lost everything are not the children of a lesser God; we are all the children of the same God who created us with our differences that we may live in peace and with dignity.