Why Christianity is NOT a religion

13 Jun Why Christianity is NOT a religion 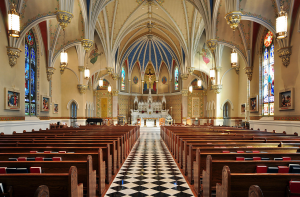 What does it mean to be a Christian? For many, the answer would be that it means going to church, singing hymns, taking communion, or perhaps, listening to a sermon. In other words, being religious. Being a Christian is therefore somewhere that you go, and something that you do, rather than something that you are.

Many column inches have been written on the decline of organised religion. Church of England data revealed that just 927,000 attended Anglican services each week in October 2016, a drop of 34,000 from the same month the previous year. The British Social Attitudes survey shows that just 3% of adults under the age of 24 label themselves Anglican and (for the first time) over half the population professes no religion. This seems to be irrefutable evidence that the country is becoming increasingly irreligious.

But does it necessarily mean that we lack faith?

Paul Tillich, a German philosopher, stated that ‘Jesus came to save us from religion’. This is a huge statement! To think of Christianity as something other than a religion feels at best counterintuitive, and at worst, blasphemous. It feels vulnerable because there is nothing to hide behind. But to step away from the trappings of religion allows reconnection with what Christianity is really all about – Jesus of Nazareth, the son of God.

If we insist on labelling Christianity as a religion, it will always be at the mercy of the fortunes and foibles of the Church. Issues of morality, weekly attendance and hierarchies become more important than living out the teachings of Christ. And this detracts from what really matters.

There must always be a means through which Christianity is administered and represented within the UK and worldwide. But it is not hard to foresee the Christian faith becoming detached, at least in part, from an institution of organised religion. This may allow for greater understanding of the life and work of Christ as inspiration for everyday life, rather than a book of rules or an institution. As Martin Luther said; ‘We must carefully distinguish between a pious (religious) man and a Christian’.

You can watch the video which prompted this blog post here:

Why Christianity is NOT a religion. With Nadim Nassar