The Awareness Foundation held a major conference, “The Future of the Near East: The Role of Christians in Building Peace and Healing Communities”, on 7th and 8th November 2018 at the Copthorne Tara Hotel in London. The keynote speeches were given by our Royal Patron, HRH The Countess of Wessex GCVO, and Dr. Souraya Bechealany, the first female Secretary-General of the Middle East Council of Churches.

The two key themes addressed at the Conference were:

In her speech, the Countess implored those present to help the people of the Near East to find an end to violence, an end that could only come through a unity borne out of genuine reconciliation. Dr. Bechealany called for an ambitious and courageous vision, backed by rational methodology; she concluded by calling on the Holy Spirit to assist us for we have nothing to fear and everything to believe.

We were fortunate to welcome guest speakers and panelists from the Levant, Canada, the USA, the EU and, of course, the UK. Over the two days, participants were 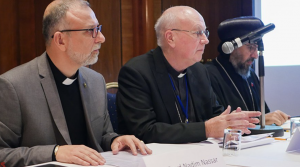 enlightened and inspired through a series of talks and panel discussions.

The first talk, on “The Future of the Near East:  The Role of Christians in Building Peace and Healing Communities”, was given by two of our Patrons, H. E. Archbishop Angaelos and Archbishop Kevin McDonald KC*HS, together with our Executive Director, The Revd Nadim Nassar (photo, above). 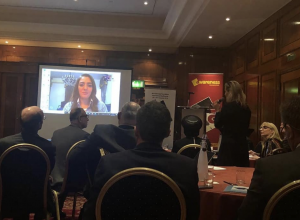 This was followed by a short film made by our Syrian Ambassadors for Peace about this project. We were then joined online from Syria by our Middle East Coordinator, Elza Nasra, who talked about our work in the Near East and answered questions (photo, below: HRH The Countess of Wessex speaks to Elza Nasra).

After a most enjoyable lunch, our first-panel discussion took place on “What are the immediate existential threats that people, especially Christians, face in the Near East today?”

Chris Chivers each spoke on the topic, facilitated by The Revd Philippa Boardman MBE

After this discussion, Mr Christopher Bunting introduced the second panel, Adnan Mouhiddin, Fr Yousef Albanna, Ms. Zahra Kazmi and Imam Qari Asim MBE, who spoke on “How do Muslims & Christians see each other in the region?”

The third-panel discussion considered “Why should Christians remain in the Near East, and what can they offer the region?”

Before lunch, our final discussion on “What is the role of business & media in building peace and healing communities?” featured The Lord Gordon of Strathblane CBE, The Revd Dr Habib Badr, Mr Robert Davies and Mrs Barbara Meynert, with Mr Richard Smart facilitating

After lunch, we split into two groups – Near East and West – for some intense debate on the nature of the Conference’s Action Plan and Closing Statement (photo, above). This was followed by a plenary session led by The Revd Nadim Nassar and The Revd Dr Habib Badr and Mr St.John Wright, the convenors of the two regional groups. The fruits of the afternoon’s discussions were blended to form our Closing Statement and Action Plan, which was then delivered to a packed River Room at the House of Lords, where we were the guests of The Lord Gordon of Strathblane CBE

A full report of the speeches and panel discussion will be available soon.

THANK YOU to everyone who took part!